This house, on the lane leading westwards from the Hampstead Road to the Chalk Farm Tavern, predated the shopping terraces of Regent’s Park Road.

At some point after the Boys’ Home came to Primrose in 1965 (see no. 119), Bow Cottage was incorporated into the Home and became its infirmary.

In front of the cottage was a semi-circular front garden with a fountain, and this was the main yard of the Home.

The Freehold land was registered in 1923, and the present building erected in the late 1920s or early 1930s. Petrol was rationed in World War II, and very few people had a car.

In the 1960s there appear also to have been other businesses: 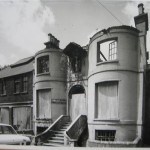 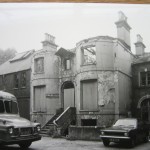 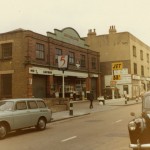 Bow Cottage was badly damaged by a fire in 1972, and demolished soon after.