This was a dairy/food shop from when it first opened in 1868 until Nisha closed in 2001.

This dairy was run by two brothers, B. and E. Sewell. Their red-and-gold exterior shop name was uncovered in 2005 by builders. It now hangs in Primrose Hill Community Centre, the former piano factory, in Fitzroy Road.

Mr Driver ran it more as a delicatessen than as a grocer, and the shop was divided into a front and back room.

Mr & Mrs Wadhwani ran the shop for ten years and changed the name to ‘Alliance’ in 1972. They converted the Drivers’ two-rooms into one, and continued selling kippers, smoked haddock, salamis and boiled ham. 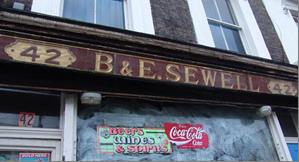 The Wadhwanis let the store to a Mr & Mrs Patel on a 20-year lease. These Patels sold to a second Patel couple.