This was run by an elderly Greek couple, who sold to a  Sicilian family.Cold meats used to hang in the window.

Partymad expanded into here from no. 67. 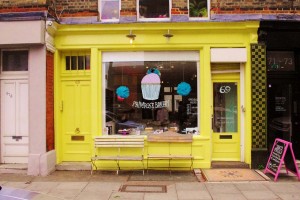 We have received a message from the Meli family who used to run the grocery:

We sold everything –  grocers,  deli. I should explain that cold means news papers hanging outside the window toys sandwiches hot soups etc it was great times the electricity shop next door we called them Aunty Elise & Uncle Norman.  There was a young guy Ken,  then next door to that was the tailor shop my Sister’s Godfather Adam run it with his brother Michelo and the next shop was a sweet shop and the corner shop was the BBC costume shop. I  met a few celebrities including John Alderton, Pauline Collins etc plus David Essex lived round the corner too … great days!