In about 1946 some rooms were found to be still lined with mirrors, and the evidence of items such as rolls of braid found in cupboards suggest that these tailors may have made livery costumes for coach drivers and various horsemen.

Dr Joynt is said to have been a keen astrologer, and to have displayed a chart in the surgery to inform patients what astral plane they were in. 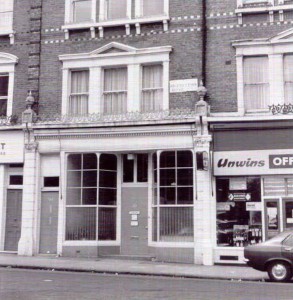 The above would all have been private doctors.This practice is said to have been attended by the less well-off. Other practices operated from private houses nearby. One for wealthier people was run by a Captain Hope from a big house on Primrose Hill Road, and another from 70 Regent’s Park Road.

The daughter of the doctor at 70 remembers being sent out as a little girl in the 1930s to deliver her father’s bills: ten shillings for richer people, two-and-sixpence for the poor, who mostly lived close to the railway.

The National Health Service was introduced by Aneurin Bevan in 1948. The NHS made a medical appointment and further treatment available to anyone at no cost, ‘free at the point of delivery’. From about 1910 until the 1970s there were also general practitioners at 114 Regent’s Park Road.