There does not appear ever to have been a ‘barber’ in Primrose Hill nor, until recently, any female hairdressers.

The number of hairdressers – usually about four – is a feature of the area which has remained constant. One who lasted a long time was Zambardi at 162.

It was in the 1960s that many shops started to have a ‘name’, other than that of the proprietor, leaseholder or manager.

Haberdashery  as well as wool was sold. Brown also had branches in Highgate and Wood Green. 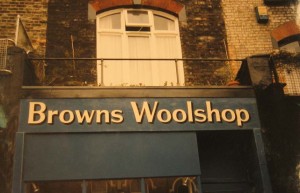