This building, cottagey-looking in comparison with its neighbours, was built as a pub before the main retail development began.

This little tavern was short-lived. Apparently its clients were ‘the roughest sort of people’, but it was popular. Surprisingly it closed down in 1853, just when it might have attracted the trade of the Chalk Farm Tavern, its closest rival, which was completely demolished in that same year. 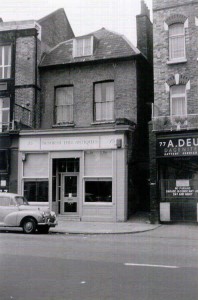 In 1885, when the dairy probably fronted the street, 75 also housed a school, which must have been in one of the buildings behind. Presumably it was connected to the church in Primrose Hill Road, which was consecrated in 1885.

The area at the back is now a patio, and the first floor is part of a house which is reached through the passage at the side.