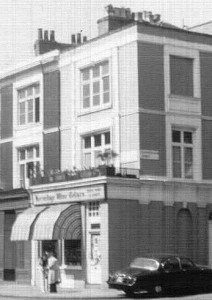 Traditionally tailors made men’s clothes, while women had dressmakers. Long skirts for women had gone out of fashion during World War I. Here the designation ‘tailor’ may reflect the practical fashions of the inter-war years. During and after World War II cloth and clothing were rationed (from 1941-49), and because of a shortage of cloth, these tailors probably had plenty of work unstitching and remodelling women’s clothes.