A local resident remembers looking down into the basement window in Fitzroy Road and watching the baker working.

There were two ovens, one under Chalcot Road, and one under Fitzroy Road. Mr Beischer baked bread seven nights a week. In the mornings he made cakes, and in the afternoons he tried to sleep….. 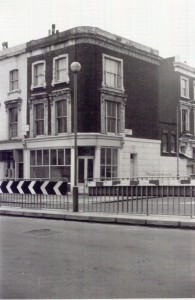 1972, apparently empty. Note the ‘central reservation’ in Chalcot Road in those days

You could buy stale rolls and cakes very cheaply.

This was run by the freeholders, and was very popular with locals.