The words ‘TURNER’ and ‘BUTCHER’ are still just visible in green-and-white tile frames on the outside of the shop. Some internal features are intact: the cashier’s wooden booth, a large area of white tiles and the meat rail hanging from the ceiling. 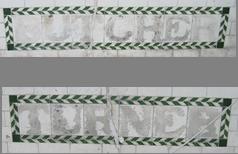 Bentley traded in radio and television components, mainly in the valves which used to be a vital part.

The building was for sale for several years  early 1970s

In summer 2005 the shop was briefly transformed into a florist’s as a set for the romantic comedy ‘Imagine you and me’ which was partly shot here.