A Marquess of Lansdowne is commemorated in Mayfair and Bloomsbury. He was one William Petty who was given his title in 1784 as a reward for successful negotiation of peace terms with the USA. It is not known what his connection with the Primrose Hill area – if any – may have been. 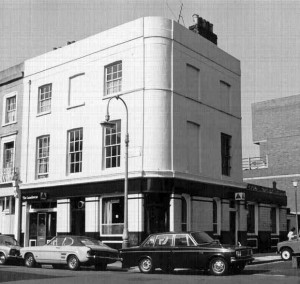 Steps at the end of Dumpton Place led down to the engine sheds (Camden Motive Power Depot), so there was easy access for the railway workers. The remains of the steps can still be seen against the wall at the end of the little cul-de-sac. The pub opened early in the morning for workers coming up from the first shift. It was particularly popular with the Irish.

In the 1960s there was strip-tease at mid-day, with heavy velvet curtains and girls on trestle tables.

The landlord is said to have absconded one Christmas with all the money from the loan club.

The upper two floors were gutted by fire one night in 1985. Four fire engines attended, and the publican and his family were rescued. There were various rumours about arson. The whole pub had to be renovated, and the old wooden snugs were removed.