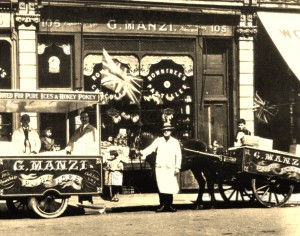 I met Eugene Manzi at one of Primrose Hill’s many patisserie/coffee shops, this one (or was it the place next door?) stocked with a minimalist display of startlingly coloured cupcakes. Eugene and I opted for tea and croissants – not a classic pairing,  but preferable to any of the whirly child’s-paintbox confections on offer. Eugene as a small boy lived above his father’s shop at  105  Regent’s Park Road from 1944 to about 1955, and recalls a mixed ‘Bohemian’ and working-class neighbourhood of artists and students, immigrants, small factories and workshops that seems a world away from the swish ‘village’ of today.

His earliest memories are of playing with his brothers in an almost traffic-free street, games of tennis against the wall of what is now Lemonia on the corner of Erskine and Regents Park Roads, and playing football outside the garage a few doors down.The mechanics were all very friendly and they’d come out of the garage and show you tricks with the ball, he recalls. He would lie in bed and hear the drunks singing as they spilled out of the Chalk Farm Tavern a few doors down. He also managed to get lost, as a very young child, somewhere in the wilds of Regent’s Park.  I was sitting in the Police Station and my dad walked in. It always really puzzled me how he knew where to look for me, out of all the places I could have been. I never could figure it out.

He saw a lot of things from that  front bedroom of no. 105, overlooking the street. There were racial tensions in the area between various groups, and on one occasion he saw the owner of a Greek restaurant across the road set on by Irishmen just outside his window. At the age of six or so, he didn’t understand what was going on. Nor did he really know what all the fuss was about when an irate father banged on the door of one of the large houses opposite, an artists’ colony frequented by duffel-coated beatniks, and demanded that his daughter leave her artist lover and come home.

He remembers, too, playing in the gun emplacements on top of Primrose Hill, a legacy of the wartime anti-aircraft batteries with their steel doors (we called the place ‘ The Bombsite’) and his mother dragging him out of a horse-drawn caravan where he had been innocently accepting sweets from some itinerant traders. In summer he and his brothers would swing across the Regent’s Canal on a rope tied to a tree, or swim in its murky waters.  They had the normal boys’ liking for living dangerously, even if the biggest danger was probably getting caught by their parents: ‘We’d have these sweets, called Tiger Nuts, and we used to  climb up on the flat roof [of the old boys’ home chapel] and find all these tennis balls and footballs, and think we were rich. We’d lord it up there with our sweets – but only till our mum came out and saw us. We’d catch it then.’

A favourite pastime for Eugene and his brothers was racing their little scooters and bicycles down the ramp next to what is now Bibendum, to the car park at the back of what he remembers as a filthy transport café with its entrance on King Henry’s Road – hard to imagine today. Primrose Hill in those days was a place of artisans, workshops, and small factories. In one of these Eugene saw West Indian immigrants for the first time. ‘There was a factory in a yard off Erskine Road, called Ultra, which made radios. All the West Indians would come off shift and they’d be wearing trousers that ballooned out at the legs, then came in very sharply at the ankles, where they’d have huge turn ups. I remember they seemed very friendly, but very exotic.’ He  also recalls a toy factory on the corner of Erskine Road and King Henry Road, and his dad going round to pick up broken toys to fix up for the children.

Eugene’s family were immigrants themselves, with the classic migrant pattern of tremendous hard work and sacrifice to set up their children in a new country. His grandfather Gaetano Manzi,  a native of Ravello on the Amalfi Coast of southern Italy, was said to have ‘walked’ from his home village to London, taking many months to do it, probably working on harvests and as an odd-job man and labourer. He set up in Primrose Hill as a fruiterer, a ‘street musician’ – in other words, an organ grinder –  and a vendor of Italian-style ice cream.

My grandad was the victim of prejudice, like most immigrants at one time or another. He used to have a cold cabinet for ice creams mounted on his bicycle, the forerunner of the ice cream van I suppose, and people would come and drop horse manure into it.

Eugene is the third youngest in a family of eight children, six boys and two girls. His father, Frank, used to laugh at his wife Elizabeth (everyone called her Betty) Palozzi’s strange accent when she spoke Italian : she was an Italian Geordie, or a Geordie Italian, and he made her self-conscious about speaking the language. As a result the children spoke very little Italian at home.

There weren’t really many Italians in Primrose Hill, mainly Irish and Greeks. They were mostly over in Clerkenwell, which they used to call Little Italy. The Manzis still have big get togethers, organised by a cousin of mine in Scotland. The last one was at an Italian old people’s home in Hertfordshire : we had a big barbecue as the weather was so good, and about seventy people came – but there have been ones better attended than that.

The family were distantly related to the Mansi family who  recently sold the famous ice-cream brand, Marine Ices, based in Chalk Farm, and others in the family were good businessmen too: One of my uncles owned a fish restaurant and a hotel in Leicester Square, as well as some clubs in Soho. He bought the restaurant for something like five grand, in 1938 or so, and sold out decades later for a huge profit. The place briefly became a high profile venture for some famous British artists  – it went bust a few months ago.

Sometime in the 1950s Eugene’s father Frank  got into the fruit machine and jukebox business and built it up into a huge concern supplying cafes and pubs up and down the country – operating, Eugene says, in a grey area as far as the law was concerned. This business was based at 119 Regent’s Park Road. Frank Manzi  was also a strictly unofficial bookmaker in a small way. Eugene remembers the proprietor of one of the local shops, a man with an unfortunate stutter.  He ran this really horrible little newsagent’s. The guy had several cats and they’d lie around on the piles of newspapers and stink the place out with their pee.  He’d ring up and say, ‘G-g-g-guess who?’ and my dad would say, oh hello Mr ______’.

Regent Automatic Supply  was hugely successful, and when Eugene was eleven the family moved out of Primrose Hill, ultimately to an eight bedroom house in Hampstead, overlooking the Heath. But his father died young, at the age of forty-nine, and Regent Automatic supply was taken over by other family members. It was still listed at no. 119 in the ‘sixties and early ‘seventies.

Eugene  remembers his dad being very strict, and his Catholic school in Belsize Park as being the sort of place where ‘they beat learning into you.’  He left school to become an apprentice toolmaker, but it didn’t suit him and went on to work as a PR for a small independent record company from Berkley, California called Beserkley which included Jonathon Richman on its roster. Then I went to work for Richard Branson’s Virgin Records first as a PR, & then, for about 7 months as the marketing manager for Virgin. After Virgin  I was at London Records as Head of Press for about 19 years.  Eugene also ran his own record shop in the Finchley Road for twenty-odd years: a life spent in and around music.

He kept up his links with the area : later on he remembers Souhami, an Indian wood veneer merchant (Jessica Souhami, the children’s author, is one of the same family), and the Howth Club, a nightclub in the former chapel of the old Boys’ Home. He also recalled the earliest vegetarian restaurant in Primrose Hill (and one of the first in London), Manna, starting up in the 1970s. He was pleased to see the restaurant still flourishing today in Erskine Road. 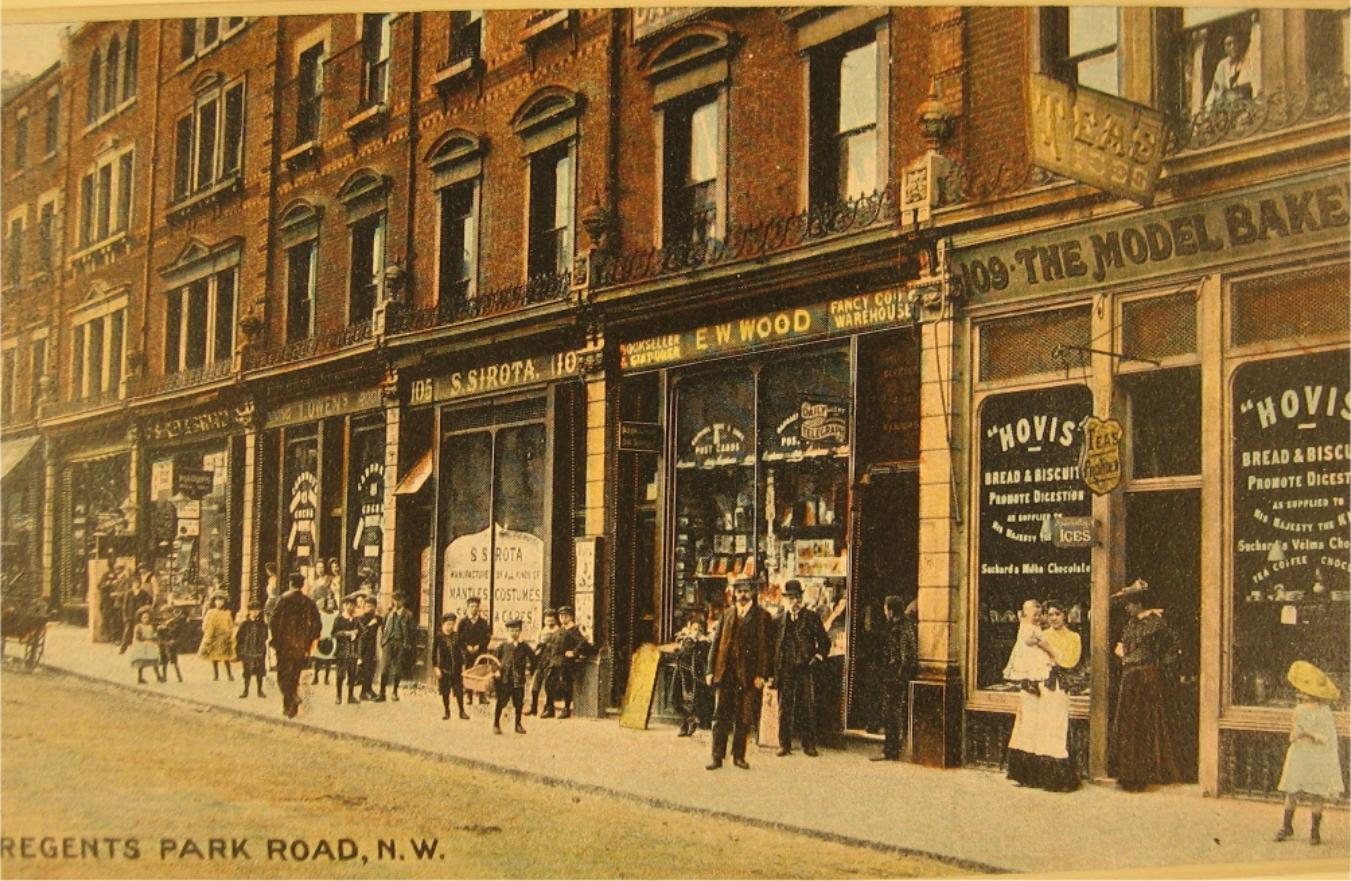 As Eugene gave me a guided tour of the Chalk Farm end of Regents Park Road, we wangled our way into no 119, now the estate agent owned by David Birkett. David was clearly very interested in and extremely knowledgeable about local history, and in no time at all he was showing us the basement, which had been a shirt factory as well as the Manzi business premises, and the old Regent’s Park Road sign hanging on the wall, bearing the former borough name of St Pancras. David had bought it for a song from a former signwriter.

Eugene seemed fascinated to be back in the former premises of Regent Automatic Supply. He took away a couple of old photos of the Rothwell Street Coronation party in 1953 – I’m going to get my magnifying glass out and see if I can see anyone I recognize – or even myself as a little lad. Apart from an unfortunate four minute delay in getting back to his car, and a ticket from an over-zealous traffic warden, it had been a very pleasant return to Primrose Hill.

Like (one suspects) more than a few people who grew up here, he doesn’t seem to relish the modern chi-chi neighbourhood, wrongly branded as ‘the village’,  and especially the new Regents Park Road, with its plethora of coffee and cake shops. Everybody knew you in the old days. You don’t have the same neighbourhood feel today. I remember the chemist [Alderson at  146 Regents Park Road],  a lovely man, mixing up medicines for whatever ailed you, and asking after your Mum and Dad and your family. You just don’t get that at Tesco’s pharmacy.