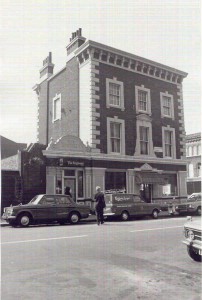 At the sale of the Southampton Estate, this plot was bought by Calverts brewers, who already controlled the Chalk Farm Tavern. They presumably built The Engineer. The pub appears on the 1849 map.

The sign shows the engineer Isambard Kingdom Brunel in front of the Saltash Bridge, and Brunel did have some involvement with the English canal system. However the designer of the London – Birmingham railway was Robert Stephenson, son of George Stephenson who designed the steam-powered locomotive known as the ‘Rocket’.

In the cellars there are boarded up passages which lead towards the canal.

In the 1970s a popular Loan, or Christmas, Club was run here by a man known as Chop Chop Charlie.