Griffith’s had a bottling plant for milk, and the old thick glass bottles could be watched as they rolled along in metal channels. 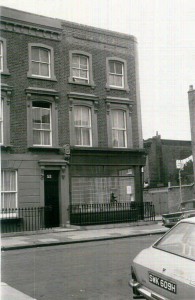 In about 1970 there was a scheme to demolish the whole north side of Chalcot Road between Fitzroy and Princess Roads. The buildings were owned by the Greater London Council, which planned to replace them with several blocks of 4-6 storey flats.

The 1960s had witnessed a great deal of demolition, and in the early ‘70s there was a new spirit of conservation.The Primrose Hill Conservation Area Advisory Committee was established in 1972. Eventually the shopping terrace was saved, as were the facades of the houses between Manley and Calvert Streets.

Circle 33 managed the redevelopment of the new flats, maisonettes and houses built behind the Victorian façade.

This is a befriending service for housebound elderly people. It now operates from Chalk Farm Library where it also offers a small information centre.