Specialised pork butchers had existed since medieval times, but became really popular in Britain when German refugee butchers brought their skills here after the 1880s. (In the trade, the Germans are still regarded as the best pork butchers.)

This butcher had its own small abattoir in the back yard. A resident who has lived in Chalcot Road since 1928 said his family never used to go there because it was too 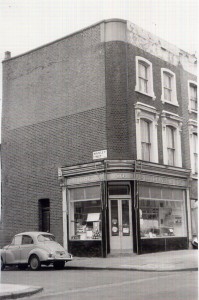 dear.They had milk, bread and eggs delivered by the Co-op, and used to buy all their other food in Inverness Street market.

Mr Hutchings had trained at Harrod’s.