This pub originally had a saloon and a public bar, separated by an off-licence. 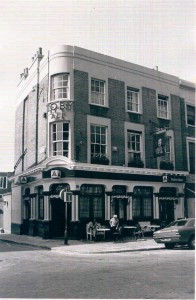 In the 1960s a bookie would take bets in the public bar.

When the pub was modernised, probably in the 1970s, the dividing walls were removed. The original cornices are still in place.

Since the early 1990s the pub has been called simply ‘The Albert’, which is what the sign says. The portrait of Prince Albert has been replaced by a full-length caricature of a Victorian gentleman in top hat and tails.