It tends to get forgotten that the stretch of road leading rightwards downhill to the Hampstead Road is still part of Regent’s Park Road. The curve follows the line of the ancient lane from Hampstead Road to the Chalk Farm Tavern. 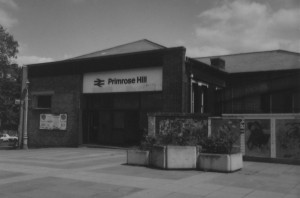 The lane was cut through when the main line from Euston to Birming- ham was builit in 1837. The original brick bridge was built in 1839, but it was demolished for railway widening in 1846 and re-built in iron.

It was pedestrianised in 1972, and this block to through-traffic along Regent’s Park Road contributes much to the ‘island’ nature of the Primrose Hill area.

This station was originally named Hampstead Road, became Chalk Farm Station from 1862-1950, and was Primrose Hill Station until it was closed to passengers in 1992. 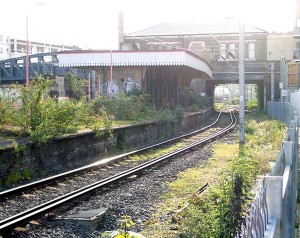 It served platforms on the North London Railway, linking Kew with the City, and was popular with commuters.

The ticket office was through the door nearest to the bridge. The remainder housed a railwaymen’s club, and evidently some other shops and businesses:

Do you know anyone who worked for Greenham Ready Mixed Concrete when it had its offices at 200 Regent’s Park Road (the Old Station) from 1965 – 1975?

I am a PhD student in the Faculty of Law at the University of Cambridge. Part of my research is looking at the people who drove Greenham’s cement-mixer lorries and, in particular, at events in the 1960s. Some people who drove these lorries were employees of Greenham; others were self-employed lorry drivers. Both kinds of driver are relevant to my research, as are any managers to whom they reported. In case it helps to jog anyone’s memory, one particular event that I am researching  happened on the day of The Great Train Robbery, on 8 August 1963.

I will be most grateful for any help that you can give me. Thank you.