It is thought that this pub was named for the wedding of Princess Alexandra with the future Edward VII in 1863. For a long time locals called it the ‘-ess’s’.

In the 1930s there were three doors and four bars, one of them a saloon with with carpets. The lavatory was outside. The pub was busy during the war because of the great activity on the railway, but it closed for a while after 1945. The last 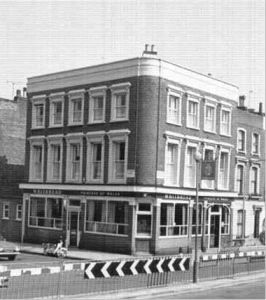 publican in the 1940s was an Irishman, Pat Shields. Every Monday he would clean the glass partitions which separated the bars. On Friday nights the owners of the café at no. 49 used to come to the pub and run a raffle in the back room. Sandwiches were available, but no other food.

The room was painted bright apricot and a large artificial tree stood in the centre. There were curving door handles with swans’ necks (some of which remain). Downstairs was a restaurant, divided into three eating areas, with rough brick walls, an old iron stove and a barrel-arched wine cellar. The outside courtyard was roofed over.

The pub became ‘The Princess of Wales’ again in 1997. The patio now has a sliding roof.