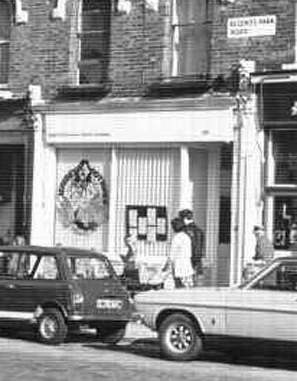 Primrose Hill and the Regent’s Park Road area were almost completely developed by about 1875. Some of the larger houses were purchased on long leases as family homes. However the early estate agents such as Ekins and Broderick, who occupied no. 166 around that time were perhaps also involved in advertising and letting rooms in the many multi-occupation houses. A hundred years later 166 was again in the same use: picture shows an estate agent there in 1972.

English butchers cut meat quite roughly across eg. a leg. Continental butchers practise ‘seam cutting’ which is more anatomical, following the line of the muscles and muscle groups. The meat is sold oven-ready, with lard already tied round it, frills on chop bones etc., and is therefore more expensive.