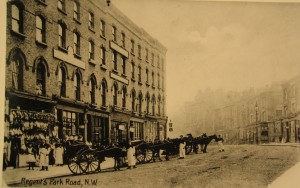 Meat was expensive and poorer people often preferred to buy from the markets in Camden or Kentish Town. In the late 19th century a local butcher would probably have purchased his animals live at auction from the new Metropolitan Cattle Market off the Caledonian Road. He could get them slaughtered there, cut into four quarters, then delivered to his shop. He could also have walked his animals to an abattoir near his shop, or even slaughtered them himself if he had a back yard. People would cook a Sunday joint as large as they could afford, then use the leftovers through the week.