Like 142 in the same street (the wine merchant), this shop remained in the same trade since it opened in 1870, until very recently when R.J. Welsh, the much-loved hardwore store, finally closed. In 2013 this shop is occupied by a beauty products store.

Victorian homes were lit by combinations of piped gas, oil lamps and candles – which were expensive. Because gas lights produced dirty fumes, the middle classes preferred to use oil lamps in their reception rooms. Oil was colza (rape-seed oil) or paraffin, which was cheap. It was collected from the shop, or delivered, in cans.

The glass chimneys of oil lamps needed daily cleaning. Street lighting used gas, and a lamplighter would go around at dusk turning on each lantern. (In 1857 a gasfitter lived in St George’s Mews.)

Oilmen sold not only oil, but also house-decorating materials such as paint and turpentine.

From c. 1889-1940 Richard and William Welsh also managed the Oilman at 43 Chalcot Road. At one stage they had eight shops across north London, but gradually sold them all off. The freehold of 156 was still held by a member of the family as of 2006.

The last proprietor came here with her husband in 1956, and paid fifty guineas to keep the name ‘Welsh’. The pictures in the gallery below (click for larger size) show a seasonal Christmas display in 1990, and Welsh’s window in 2000. Red and green are the traditional colours for the façade of a hardware shop. 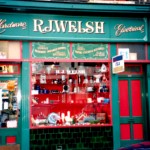 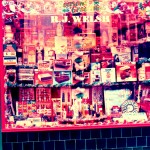 Until 1960 they would still deliver paraffin and logs, and overhaul heaters. Because of the chemical products sold, the manager had to have a Poisons Licence, and until about 1960 customers buying anything dangerous had to sign in a Poisons Book.