Greengrocer 2013 (since 1970 under the same owner, and possibly continuously since 1895 in the same trade).

Berlin wools were ready-printed ‘tapestries’ sold as kits for sewing at home.

Most women would have been kept busy sewing and mending essential clothing so this shop, like that at 87, probably had a middle-class clientele of more leisured ladies.

The first fruiterer in the road was at 71 in 1855, but 152 has been by far the longest lasting. There was evidently once a need for one in each major street in Primrose Hill and at various times there have been many local greengrocers.

The development of steamships in the 1870s brought tropical fruits such as bananas, pineapples, peaches. Potatoes were a vital staple for the poor, and also the vegetable most eaten by wealthier people. No one in towns ate many green vegetables until the early 1900s.

In World War II, vegetable shortages were compensated for to some extent by the ‘Dig for Victory’ campaign. Large areas of Primrose Hill were ploughed up to make allotments. German prisoners of war were sometimes made to work there. 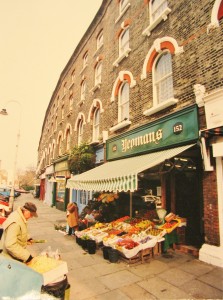 The 1972 photo shows ‘Shearn’s’, who also had a branch in Tottenham Court Road. Yeoman’s evidently did not change the blind immediately after they took over again.

Until 1974 the managers would have collected their produce early in the morning from the market in Covent Garden, at the south end of Drury Lane. Now they have to go to Nine Elms in Vauxhaull, south of the river.