Gradually, as the suburb began to grow, shops and a pub (The Queens Hotel, now 49 Regent’s Park road) arose to serve the new residents. The picture shows the new pub in about 1905 to 1907, looking north towards Chalk Farm. 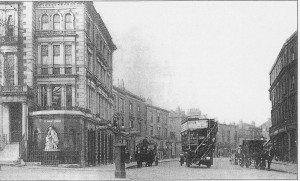 The very first shops of Primrose Hill, listed in 1855, were between present nos. 51 and 73 Regent’s Park Road. They were a confectioner, grocer, stationer, cow-keeper, fruiterer, and tobacconist.

Late in 1865, when the entire street was renamed ‘Regent’s Park Road’, these buildings were allocated their present numbers, 49-75.

In 1840, when the suburb began to be developed, there were already a few cottages along the old lane leading from the Hampstead Road to the Chalk Farm Tavern: Bianca Lodge, Bow Cottage, and Montrose House. These have all gone.

Gradually the third shopping terrace appeared, stretching from 91 at Erskine Road to 109 where the buildings of the Boys’ Home began. This terrace of shops is nearly symmetrical, with a very shallow pediment in the centre over nos. 91 and 101. These shops first appear in the Directory in 1870.

The fourth, and last, retail terrace to be built in Regent’s Park Road was on the even side. The four houses west of Rothwell Street, 118-124, appear on the parish map in 1868, shops 126-142 by 1870. However they were evidently not let immediately as there are no census entries for them in 1871.They start to appear in the Directory between 1872-74.

There is no 144 Regent’s Park Road. As this was the last terrace to be built in the street, it is possible that the builders planned slightly narrower houses, or miscalculated their spacing and/or numbering, and did not have room for a no. 144 before the junction with Sharpleshall Street.