Until Chalk Farm Bridge was pedestrianised in 1972, and Gloucester Avenue became ‘no entry’ by Cecil Sharp House, Gloucester Avenue was a very busy road as a cut-through for people driving from the West End to Hampstead.

This newsagent was very busy selling papers and cigarettes to people on their way to and from work. 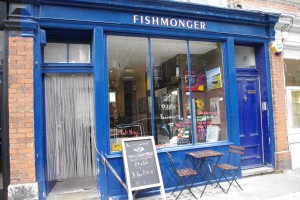