In 1840, Primrose Hill did not exist as a neighbourhood: the sale map of that year shows a  plan for  wide roads and avenues, with fine houses, built on what had been open country. Forty years later, the layout of the streets, and most of the buildings, was almost the same as it is now. Read the story of Primrose Hill’s streets here, beginning with Chalcot Road – below

The story of Gloucester Avenue

The story of Princess Road

The story of Regent’s Park Road 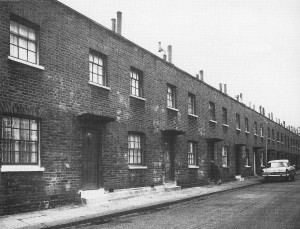 Manley Street, off Chalcot Road, in the 1970s

The sale map of 1840 envisages a wide ‘intended road’ along this stretch, intersecting with another ‘intended road’ (present Fitzroy Road) at a grand junction with an island of garden in its centre. The suggested building plan outlines four large detached houses angled to face into this junction, and only a few pairs of semi-detached houses set in large gardens along the two roads.

Once developed, these roads remained generously wide, but were built up as terraces. The first buildings along the Chalcot Road stretch (present nos. 8-11 Chalcot Square) appear on the 1849 Parish Map.

The railway cottages (see picture) also figure on that map, just south off present Chalcot Road. Built for the railway workers – mostly engine drivers – they were out of character with the original grand designs for the area. Modest homes, with their front doors opening straight into the kitchen, they were very dilapidated by the time most of them were demolished in the 1970s, to be replaced by Auden Place.

In about 1970 there was a scheme to demolish the whole north side of Chalcot Road between Fitzroy and Princess Roads. The buildings were owned by the Greater London Council, which planned to replace them with several blocks of 4-6 storey flats. Opposition to this was the catalyst for the formation of the the Primrose Hill Conservation Area Advisory Committee. Read more….