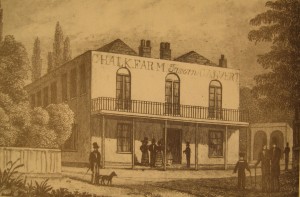 Primrose Hill has been a mixed area since its first construction – the major part of it between about 1845 and 1870. Unlike, say, Kentish Town, it was not a village overtaken by expanding London, but a wholly new suburb built on the fields round the bottom of the hill itself. This land formed part of the estate of Lord Southampton who in 1840, having sold what he owned in the area of present-day Mornington Crescent and Camden Town, put his more northern fields up for auction. 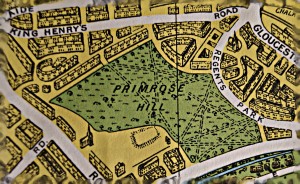 The only large building in the area then was the Chalk Farm Tavern – on an ancient lane winding west off the comparatively busy Hampstead Road, a medieval route north out of London. This tavern (on the site of present 89 Regent’s Park Road) was to remain, and housing to be built all around it and its gardens opposite.

The 1840 sale map outlines an ambitious scheme: large detached and semi-detached villas (a word which has been debased) set in their own spacious gardens, with wide and generously-curving roads. The eventual development was both less imposing and more varied. 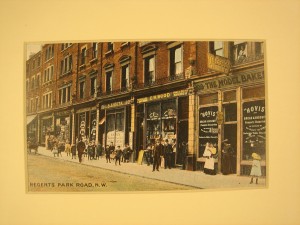 The Primrose Hill residential area has always had a clear physical identity, contained as it is by three boundaries. Two of these pre-date the housing and are formed by transport systems: the Regent’s Canal, completed in 1820, to the south; and the railway line northwards out of Euston, opened in 1837, curving round its east and north. The third boundary came in 1842 when an act of Parliament designated the fields of Primrose Hill to the west a future ‘park’. Local residents today have a clear sense of when they are leaving the area. Estate agents, appealing to nostalgia, refer to the shopping area of Regent’s Park Road as ‘the village’ – which it never was.

The determining factor for the character of the new suburb was the second of the above three boundaries: the railway. Some of the earliest buildings were the modest railway cottages (on the site of present Auden Place, between Chalcot Road and Regent’s Park Road) which housed the men servicing the noisy engines and goods depots on the site of today’s trendy stalls of Camden Lock. During the 1850s the popularity of rail travel caused the line to become increasingly busy and dirty, the smoke and soot belched out by the coal-burning engines and shunting yards rendering the building plots closest to the tracks undesirable.

Another factor may have been the delay in building. Between the sale of the Southampton estate in 1840 and completion of most of the Primrose Hill area about twenty-five years later there would have been changes in architectural taste and family budgets. London was expanding as fast as the new middle classes.

Eventually only the plots furthest from the railway were developed with the larger homes – and even these were taken by people who were ‘respectable’ rather than ‘fashionable’. Instead terraces appeared: a row of perhaps five or so narrower houses on a plot where the sale plan had suggested only a pair of detached villas. Many of these terrace houses quickly deteriorated into lodging houses. Some were rented out floor-by-floor, others room-by-room. Washing and cooking facilities were shared and minimal. Simple meals might be provided for boarders.

The many mews secluded behind the main streets housed not only private carriages, but livery stables, artisans’ workshops and light industry, so there has been, right from the start, a healthy admixture of commercial activity. Apart from the railway, two of the larger local employers must have been the piano factory in Fitzroy Road and the Electric Telegraph Company complex in Gloucester Avenue. This variety of use distinguishes Primrose Hill from areas like Belgravia and Kensington – which some consider to be more desirable, and where development was limited to a certain architectural and social uniformity by clauses in the original land sales restricting building to purely residential purposes.

Some of the larger houses in Primrose Hill were purchased freehold, more were taken on long or short leases. These became one-family homes, employing two or three servants. However the middle-income terraces quickly became densely occupied, with a typical pattern of one family per floor, sometimes one per room. At the lower end of the local social scale, the small two-up two-down railway cottages were occupied by railway workers and their families with, in 1851, an average of four to six people per house. Later censuses suggest that they became poorer and were reduced to one family per room.

Charles Booth, the Victorian sociologist, identified eight classes among the people of London. His 1889 ‘Descriptive Map of London Poverty’ identifies the larger houses of Primrose Hill as ‘upper middle and upper class, comfortable to wealthy, the servant-keeping class’. Others are ‘well-to-do, lower middle class, one or two servants’. Yet others are ‘higher class labour, working class comfort, good ordinary earnings’. But the large households revealed by the censuses suggest tough and cramped conditions which would be classified very differently today.