Chamberlain Street is a cul-de-sac, its blunt end being on the boundary of the old borough of St Pancras. It was built in the mid-1850s, and was originally called Bernard Street. The Primrose Tavern (present no. 75 Regent’s Park Road) predates the rest of the block and figures as an isolated building on the 1849 map. It had been there since about 1846 but was closed in about 1853. 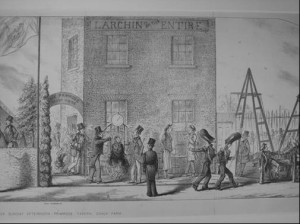